About the "assumption of Mary"

mica said:
no, not when you parrot teachings of the rcc.
Click to expand...

BY what authority to come?
M

Blessings8 said:
to prove your point
Click to expand...

I have no need to prove whatever point you think I posted.
M

mica said:
no, not when you parrot teachings of the rcc.
Click to expand...

Blessings8 said:
BY what authority to come?
Click to expand...

what is it you are trying to ask?

pilgrim said:
The Church doesn't teach false doctrines. It is the pillar and foundation of the truth.
Click to expand...

Your church teaches false doctrines all over the place, not found in tbe Bible, not even a hint. Like the 4 Marian Dogmas, one must believe, to be saved.

Blessings8 said:
You cant be an apostate unless you left the one true church. Denominations who don't even claim apostolic authority are not the Church Christ established.
Click to expand...

Churches that teach what the apostles taught in the first century church are the true Apostolic church. Yours teaches plenty not taught by Jesus or the apostles--like the 4 Marian Dogmas. That means your church is not an apostolic church. Not by a long shot.

Bob Carabbio said:
Like I said: "BASED ON NOTHING". Roman Catholics "Develop" all sorts of baseless doctrines to load on their victims. If they DID find a "Body" 800 years after the fact, how would they even know who it was????
Click to expand...

The corpse would have to have some ID buried with it, or in a bone box with an inscription etched on it, clearly identifying who it was.

Blessings8 said:
lol, you posted none,.
Click to expand...

Yes, she has posted some.
A

Blessings8 said:
Is that your excuse? Those who sexually sinned?
Click to expand...

Don't tell us how holy your church is when it has leaders doing stuff like mccarrick did. You brag that the rcc is true, but yet your leaders don't act true do they? You also have a current pope, who participated in 2 pagan rituals. 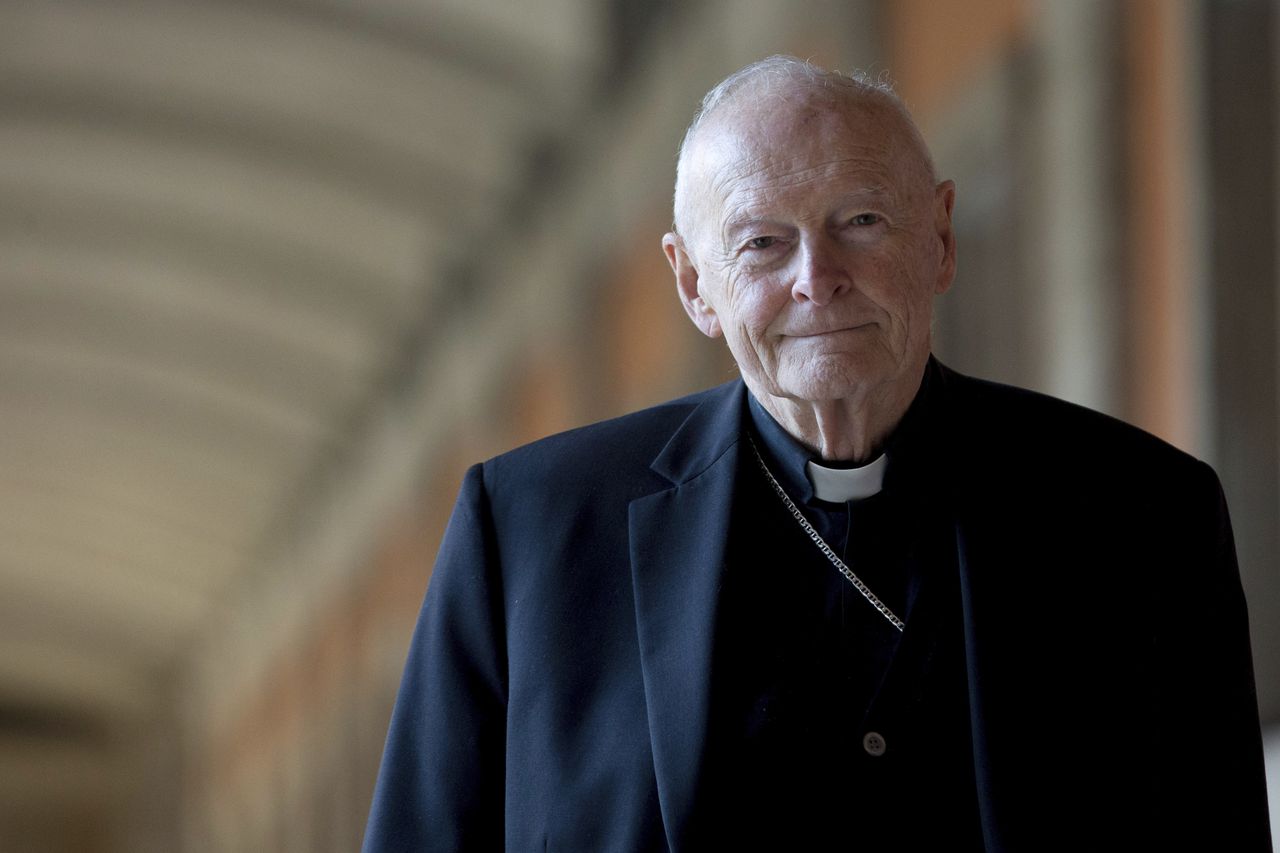 Victim charges he and others were groomed and manipulated as teenagers when they visited New Jersey beach house.

Blessings8 said:
You cant be an apostate unless you left the one true church. Denominations who don't even claim apostolic authority are not the Church Christ established.
Click to expand...

Your church can claim apostolic authority all it wants to--that won't make it true. What it teaches does not remotely teach what Jesus and the apostles taught. Your church has gone heterodoxic--big time.
Last edited: Aug 28, 2022

Blessings8 said:
nope. And who are you to say it does? by what authority to proclaim to know infallibly what is truth?
Click to expand...

We can compare what is actually in Scripture with what your church teaches, and can then determine, by discernment given to us by the indwelling HS, that it has many unbiblical teachings. We "test the spirits" as Scripture exhorts us to, as even the Bereans did, to test what Paul was teaching them. Where did THEIR "authority" come from, to do that?

Blessings8 said:
you do realize that there are many NC faiths that sin the same way. you think it is only the those who have infiltrated Christs church that are to be held responsible?
Click to expand...

There have been some pastors and Vicars who sexually abused children in my church body. It happened once with a vicar in my parents' church, decades ago. They were arrested, went to jail, and were defrocked if they were already pastors. No cover up.

Blessings8 said:
You posted no verses. All you posted is your opinion.
Click to expand...

Mysterium Fidei said:
The Assumption of the Blessed Virgin Mary into heaven is a dogmatic tradition of Apostolic origin.

Among the feasts of the Saints this is the solemnity of solemnities. "Let the mind of man," says St.Peter Damian, "be occupied in declaring her magnificence; let his speech reflect her majesty. May the sovereign of the world deign to accept the good will of our lips, to aid our insufficiency, to illumine with her own light the sublimity of this day"

In his instructions to the newly-converted Bulgarians, Pope St. Nicholas I, who occupied the Apostolic See from 858 to 867, had already united these four solemnities (Christmas, Easter, Pentecost and the Assumption) when recommending the fasts of Lent, of the Ember days, and of the Vigils of these feasts: "Fasts," he says, "which the holy Roman Church has "long since received and observed."

St. Jerome eloquently declared the grandeur of this feast : "Incomparable as is she who thereon ascended glorious and happy to the sanctuary of heaven: a solemnity, the admiration of the heavenly hosts, the happiness of the citizens of our true country, who, not content with giving it one day as we do, celebrate it unceasingly in the eternal continuity of their veneration, of their love, and of their triumphant joy."

Certain ancient calendars give this feast the title of Sleep or Repose, dormitio or pausatio of the Blessed Virgin. The Greeks, from whom we have the expression, have always included in the solemnity the glorious triumph that followed her death. The same is to be said of the Syrians,
Chaldeans, Copts, and Armenians.

Thus the Supreme Pontiff, Pope Pius XII, pastor of all Christians and head of the Universal Church solemnly proclaimed in his declaration, Munificentissimus Deus, 1 November 1950: "By the authority of our Lord Jesus Christ, of the Blessed Apostles Peter and Paul, and by our own authority, we pronounce, declare, and define it to be a divinely revealed dogma: that the Immaculate Mother of God, the ever Virgin Mary, having completed the course of her earthly life, was assumed body and soul into heavenly glory."

Satan said:
If you, then, will worship me, it will all be yours.”

8 And Jesus answered him, “It is written,

“‘You shall worship the Lord your God,
and him only shall you serve.’”

There are two words used worship and serve. Worship we know but the Greek word for serve includes veneration or religious service.
R

Bonnie said:
We can compare what is actually in Scripture with what your church teaches,
Click to expand...

Which is why the RCC denies and despises sola scriptura. The hierarchy know that if their "private interpretations" and unwritten(!) "sacred traditions" were compared to God's Word, they'd be out. Out of power, out of position, and out on the street!

RiJoRi said:
Which is why the RCC denies and despises sola scriptura. The hierarchy know that if their "private interpretations" and unwritten(!) "sacred traditions" were compared to God's Word, they'd be out. Out of power, out of position, and out on the street!

That is a good point. Kudos! They would realize that they wouldn't need their priests to "interpret" Scripture for them; they could understand it on their own, with the help of the indwelling HS. After all, Lynn Wilder and her entire family read the NT for themselves, taking off their Mormon glasses first, before reading it, and doing so led them out of the darkness of Mormonism into the true light of the True Jesus Christ of the Bible. Not trying to change the subject, but just using this as one example, to show the power of God's Holy Word!
Last edited: Aug 29, 2022

pilgrim said:
Where does it say "regardless of denominational affiliation" in Scripture? That is Protestant made up stuff along with denominations themselves. Manmade traditions!
Click to expand...

Since when do you care what Scripture says? Only when it suits you?

Where does the Scripture talk about the Roman Catholic Church? Priests and nuns in the NT church? Celibate, unmarried clergy? Popes and a Magisterium? Praying to saints dead in the Lord, especially Mary? Indulgences? Upholding church leaders and following them, no matter how corrupt and worldly they are?

I have news for you: YOUR church is a denomination; it fits the definition for one, when used of churches. BING dictionary says this:

Sorry, but the church is made up of ALL believers everywhere, who worship God in Christ Jesus and trust in Jesus Christ only for their salvation, great and free, and not in belonging to this or that sect/denominational body, OR in praying to saints dead in the Lord for help and salvation! Your church, in its arrogance and pride, likes to call itself the one true church, but that is far from the truth. It has mixed in so many lies with what Biblical truth it does teach, that the truth of what the Bible really teaches has gotten buried under a ton of man-made doctrines found nowhere in Scripture, not even a hint.
Last edited: Aug 29, 2022
B

Matt.20:25​
Jesus called them unto him, and said,​
Ye know that the princes of the Gentiles exercise dominion over them,​
and they that are great exercise authority upon them.​
​
26 But it shall not be so among you:​
​
​
and Stella proves she doesn't belong to the Church of Christ​

pilgrim said:
The Church has God given authority over us. It makes rules for our own good. In a similar way, a parent has God given authority over his child. A mother or father can tell a child he must join the family for dinner or when his bedtime is or any other rule of the house and the child is obligated to do so or he sins against God as well as the parent, doesn't he? Does Scripture mention dinner with the family or bedtime or anything of that sort? No it doesn't. It doesn't have to. We are obligated to all rightful authority, including the Church, God has placed over us.
Click to expand...

God the Father nor Christ ever placed anyone under​
the authority nor dominion of the the princes of the Gentiles​
in fact he strictly forbid it​
​
But it shall not be so among you:​

pilgrim said:
Heb 13:7 Obey your leaders and submit to them, for they are keeping watch over your souls, as those who will have to give an account. Let them do this with joy and not with groaning, for that would be of no advantage to you.
Click to expand...

Bonnie said:
No. I can know plenty without doing that.
Click to expand...

sure, without the obedience.

Bonnie said:
Which is any called and ordained servant of the Word,
Click to expand...

Ordained through the 'laying on of hands'.... apostolic succession

Bonnie said:
because all believers are a royal priesthood
Click to expand...

yes, although you forgot about the ministerial priesthood

Arch Stanton said:
sure, without the obedience.
Click to expand...

Obedience to your church leaders? Yes, no obedience to them. To Jesus Christ? Most assuredly!

Arch Stanton said:
Ordained through the 'laying on of hands'.... apostolic succession
Click to expand...

Oh, so you acknowledge that ordinations in my church are legitimate, eh?


Arch Stanton said:
yes, although you forgot about the ministerial priesthood
Click to expand...

I forgot nothing. But there are no church workers called"priests" in the NT church, because ALL believers are a royal proesthood to God the Father, with Jesus as our great High Priest. We have pastors, elders, deaconesses and deacons.

Bonnie said:
Obedience to your church leaders? Yes, no obedience to them. To Jesus Christ? Most assuredly!
Click to expand...

Bonnie said:
Oh, so you acknowledge that ordinations in my church are legitimate, eh?
Click to expand...

Only if you are Orthodox

... I think you are Lutheran

Bonnie said:
We have pastors, elders, deaconesses and deacons.
Click to expand...