Discussion between Rakovsky and Septextura on caring about Commentaries.

On another thread, Septextura wrote:

I don't care for the Talmud in the same sense I don't care about church fathers and Bible commentaries. They are people's flawed opinions, often conflicting with each other, full of heresies. I have a sefaria.org account that I checked for a year or so for rabbi commentaries, but I can't say I benefited anything from reading them.
Click to expand...

practical, reliable understanding the Bible, as well as Christianity from the Apostolic and Apostolic Fathers' age demands caring about church fathers or Bible Commentaries. Otherwise you get the situation where two readers who don't care about commentaries but believe that they are divinely led read the same passages and come to opposite conclusions even on salvation topics like Infant Baptism. So not caring about commentaries interferes with a practical and reliable understanding.
Click to expand...

You still make up your own mind which commentary you consider true. What is your ultimate authority on deciding?
Click to expand...

Normally when you want to understand what a religion teaches you look to the commentaries, particularly if there is a consensus. So for instance if you want to know what Lutheranism teaches, you look to what Luther wrote, as well as to the early Lutherans, like the Augsburg Confession. Based on this approach, then by analogy we would look to those who knew the apostles as well as the first few generations of Christians. This means the early Church Fathers' writings like Polycarp and Irenaeus.
Click to expand...

In practical sense, how do you decide between conflicting interpretations of scripture between commentator A and B?
Click to expand...

This is also how it works if you want to understand Lutheranism. You look at the Augsburg Confessions, Luther's writings, and then the early Lutheran writers. Then if there is a conflict in Lutherans, you give priority to early views and to majority views.

Some kind of "Dogmatic Individualism" where "some ostensibly Spirit-led people disagree so I am the only right one in interpreting the Bible because the Spirit shows me" or "the best way is to go ONLY by where I feel the Spirit leads me" disproves itself because people who follow that route disagree on important issues with each other.
Click to expand...

History has shown that this method isn't failproof. If men of influence agree on a blasphemy to be taught as orthodoxy, it automatically makes it orthodox by no other authority than man's. Then this blasphemy trickles down everywhere like leaven, polluting the church body. If opponents arise, they'll get suppressed. Arianism almost became orthodoxy. Worshiping graven images did become orthodoxy.
Click to expand...

One man esteemeth one day above another: another esteemeth every day alike. Let every man be fully persuaded in his own mind.
Click to expand...

When each of us stands before the judgment seat of God, the King our Lord Christ Jesus, we will be judged individually, for every thought, word and action. There will be no denominations and religions. Those that teach will be judged more strictly.
Click to expand...

Your argument is that this method is not "failproof" due to "worshiping images" and that therefore it should be rejected altogether so that the best is if everyone believes what they feel led to believe and not care about commentaries. The output of your method disproves it, as it says "By their fruits ye shall know them". Tons of sects with mutually exclusive teachings or so called "damnable heresies".

So Calvin says that rejecting infant baptism is from the Devil, but there are plenty of Calvinists who reject infant baptism. Usually the ones who reject infant baptism are of the "I don't care about commentaries" kind, but likely not exclusively so. So then you get stuck with the issue of followers of Calvin who believe that the Spirit guides to truth, so that their "God-Inspired" founder believes that they believe what is from the Devil, and according to those followers, they are led into this belief by the Spirit.

Certainly it is an objectively disprovable belief that "just feeling inspired without caring about commentaries" is a reliable method for understanding the Bible.

You argue that on judgment day there are no denominations and everyone is judged individually. But an individual judgment doesn't make the idea that go-it-alone interpretations are reliable.

Have the "Reformers" who taught infant baptism not been "Spirit-led"? Or is it only opponents of infant baptism who are "spirit led?" And then you throw in this idea of strict Last Judgment into the midst... It becomes very dogmatic and harshly judgmental and divisive between Christians all at once.
Click to expand...

I also wrote to Septextura:

The Tradition vs. Scripture Alone debate seems better for another thread. I don't know how constructive it is to debate it here. It just seems to go down a well of negativity where the "Scripture Alone and No Commentaries" side goes down this eternal path of emphasizing how its own "Spirit led" readings must be right because the person feels the Spirit and the Spirit can lead someone to the true reading.
Click to expand...

I didn't say to reject councils, theologians, confessions, catechisms, teachers etc. We can consult them as part of our studies, knowing they are fallible opinions of men. Only the words of God are infallible, even though our interpretation is fallible. If 100 men agree on a lie to be truth, is it truth?

If I'm convinced of my own mind from reading Scripture that icons/statues veneration or credo/pedobaptism is blasphemous to God, should I ignore my conscience and do what a council of men agreed on?
Click to expand...

I worry about how it looks like an endless well of negativity and arbitrariness. Because I am going to give different arguments for emphasizing councils, commentaries etc. to understand Christianity, and you can just say that no argument can work because what you feel that what the Spirit or your conscience tells you about any topic trumps any other argument.

So if the Bible talks about people resurrecting after touching Elisha's bones or getting healed by touching Jesus' robe, or getting cloths from Paul for healing, or if Christian apologists today point to the Turin Shroud, then you can say that your conscience tells you that the Bible says not to care about relics from Jesus and the apostles because they can't heal people. And you can say that the Spirit tells you to destroy them like some Protestants did to medieval art and relics.

And now centuries later people like me want to know what early pictures of Jesus looked like, but there was alot of destruction by the medieval preProtestant iconoclast movement.

So I worry that it goes into a spiral of circular reasoning and negativity.

a problem he raises is how to know what is His and I think that is a valid question given the Roman church decided what books to include and what not to. but I'd never say to destroy any texts.

If others are not to post here and it's just for you two....just ignore this note. It's okay. I'm not EO but I was raised Catholic and left it many years ago.

"History has shown that this method isn't failproof. If men of influence agree on a blasphemy to be taught as orthodoxy, it automatically makes it orthodox by no other authority than man's. Then this blasphemy trickles down everywhere like leaven, polluting the church body. "

My pastor who was seminary trained - DTS - under Lewis Sperry Chafer ... was one of the few pastors who stuck with Isagogics and exegesis, used to lament about many commentary writers. When I was first starting out in Bible college I soon discovered that what most commentaries contained were slim pickins for anything with real weight.

I found the best teachers do not have the time to write commentaries. They may write books. One exception I found are the excellent commentary works of Ernest. R. Campbell -Th.D... who taught Greek to students of the Bible. http://www.biblionbiblecollege.org/bookstore.php

Making the word of God of none effect through your tradition, which ye have delivered: and many such like things do ye.
Click to expand...

rakovsky said:
And now centuries later people like me want to know what early pictures of Jesus looked like, but there was alot of destruction by the medieval preProtestant iconoclast movement.
Click to expand...

I'm not sure where to put this, perhaps on another thread (not being too familiar with the topic as you might be)... Since this thread is quiet and since Charlemagne instigated much commentary by his support of texts and libraries I thought perhaps it was at least slightly on topic. : )

What is your understanding of the addition asked for by Charlemagne, of the filioque to the canon? Apparently this and papacy were the two things that the eastern church objected to. Why was the extra line was added ? Admittedly I haven't studied this enough yet to know why Charlemagned wanted this and pushed it through or what was his intended meaning, only that rome felt pressured to grudgingly add it at the second council of constantinople.

The controversy arises from the insertion of the word Filioque ("and the Son") in the line: 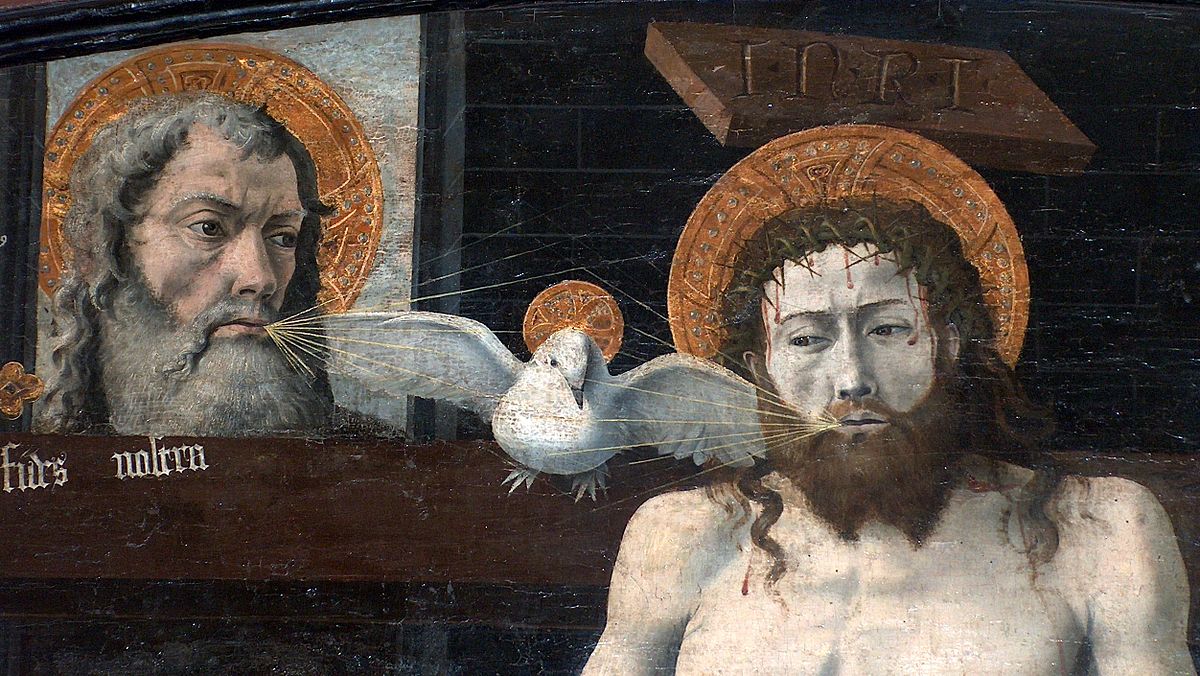 e v e said:
I'm not sure where to put this, perhaps on another thread (not being too familiar with the topic as you might be)...

What is your understanding of the addition asked for by Charlemagne, of the filioque to the canon? Apparently this and papacy were the two things that the eastern church objected to. Why was the extra line was added ? Admittedly I haven't studied this enough yet to know why Charlemagned wanted this and pushed it through or what was his intended meaning, only that rome felt pressured to grudgingly add it at the second council of constantinople.
Click to expand...

Right, it's better for another thread. As I recall, orthodox Christians in France were confronted with a heresy about the Holy Spirit that neither the Western Church nor the Eastern Orthodox Church would agree with. So in France, the Church there added those words to the Nicene Creed. However, despite the good intention that the French Church had, the phrase has a certain problem with ambiguity. To say that the Holy Spirit proceeds from the Son could either mean that (A) the Son is the ultimate source for the Holy Spirit, the problem being that in fact the Father is the ultimate source, or it could just mean that (B) Jesus bestowed the Holy Spirit on people like in Acts 1-2. Eastern Orthodoxy AFAIK would move exactly say that the Holy Spirit Proceeds from the Father and through the Son.
The other problem is procedural - that the Latin Church was changing the Creed without an Ecumenical Council saying to do so.
You must log in or register to reply here.
Share:
Facebook Twitter Reddit Pinterest Tumblr WhatsApp Email Share Link
Top