[1] Luke 1:33​
(33) And he shall reign [basileusei][Vb] over the house of Jacob for ever; [εἰς τοὺς αἰῶνας/lit. unto the eternity [aionas [PlMas] and of his kingdom [basileias][Nn] there shall be no end.[telos]​
In this verse the reign/basileusei, which is the verb form of the word, is "aionas" and of the kingdom/basileias, the noun form of the same word, "there shall be no end.” “Aionas” by definition here definitely means eternity.

[2] John 6:58​
(58) This is the bread that came down from heaven. Your ancestors ate manna and died, but whoever feeds on this bread will live forever. [εἰς τὸν αἰῶνα/aiona[lit. unto eternity]​
In this verse Jesus juxtaposes “live forever” with “death.” If “live aiona” is only a finite period, a finite period is not opposite “death.” Thus “aiona” by definition here means “eternity.”

[9]John 6:27​
(27) Labour not for the meat which perisheth, but for that meat which endureth unto everlasting [aionios] life, which the Son of man shall give unto you: for him hath God the Father sealed.​
In this verse Jesus contrasted “aionios meat” with “meat that perishes” If aionios means an indefinite age that is not opposite “meat that perishes.” By definition aionios means eternal.

[11]Romans 5:21
(21) That as sin hath reigned unto death, even so might grace reign through righteousness unto eternal [aionios] life by Jesus Christ our Lord.​
In this verse Paul juxtaposes “aionios life” with death. “A finite period life” is not opposite death. “Aionios life” by definition here means ‘eternal life.”

[13]Romans 1:20
(20) For the invisible things of him from the creation of the world are clearly seen, being understood by the things that are made, even his eternal [aidios] power and Godhead; so that they are without excuse:
[14]Romans 16:26
(26) But now is made manifest, and by the scriptures of the prophets, according to the commandment of the everlasting [aionios] God, made known to all nations for the obedience of faith:​
In Rom 1:20 Paul refers to God’s power and Godhead as “aidios.” Scholars agree “aidios” unquestionably means eternal, everlasting, forever, unending etc. In Rom 16:26, Paul, the same writer, in the same writing, book of Romans, refers to God as “aionios.” Paul has used “aidios” synonymous with “aionios.” Thus in this verse by definition “aionios” means eternal, everlasting.

[16]2 Corinthians 5:1
(1) For we know that if our earthly house of this tabernacle were dissolved, we have a building of God, an house not made with hands, eternal [aionios] in the heavens.​
In this verse Paul juxtaposes “aionios house” with “earthly house which is destroyed.” Is God going to replace our destroyed earthly house with a house which only lasts a little longer and will be destroyed at the end of an age? The aionios house is not destroyed, the opposite of “is destroyed.” Thus, “aionios” by definition here means “eternal.”

[17]1 Timothy 6:16
(16) Who only hath immortality, [aphthartos] dwelling in the light which no man can approach unto; whom no man hath seen, nor can see: to whom be honour and power everlasting [aionios]​
In this verse Paul paralleled “aionios” with “immortality.” If “aionios” is only a finite period, God cannot be “immortal” and only exist for a finite period at the same time. Thus “aionios” by definition means “eternal.”

[19]Romans 2:7
(7) To those who by persistence in doing good seek glory, honor and immortality, [apftharsia] he will give eternal [aionios] life.​
In this verse Paul parallels “aionios” with “immortality.” If “aionios” is only a finite period, believers do not seek for “a finite period,” and “immortality” at the same time. But they can seek for “eternal life” and “immortality” at the same time. Thus by definition “aionios life” here means “eternal life.”

[20]1 Timothy 1:17.
(17) Now unto the King eternal, [aion] immortal, [aphthartos] invisible, the only wise God, be honour and glory for ever [aion] and ever [aionios]. Amen.​
In this verse Paul parallels “aion” with “immortal.” “Aion” cannot mean “age(s),” a finite period and immortal at the same time. Thus “aion” by definition here means “eternal.”

[21]Romans 5:21
(21) That as sin hath reigned unto death, even so might grace reign through righteousness unto eternal [aionios] life by Jesus Christ our Lord.​
In this verse Paul juxtaposes “aionios life” with death. “A finite period life” is not opposite death. “Aionios life” by definition here means ‘eternal life.”

[23]Hebrews 7:24 but because Jesus lives forever [aion] he has an unchangeable [aparabatos] priesthood.​
In this verse “aion” is parallel with “unchangeable.” If “aion” means “age(s),” Jesus cannot continue for only a “finite period” and simultaneously be “unchangeable.” Thus “aion” by definition here means “eternal.”

[24]1 Peter 1:23
(23) For you have been born again, not of perishable seed, but of imperishable, [aphthartos] through the living and enduring word of God. …
1 Peter 1:25
(25) but the word of the Lord endures forever.[aion] " And this is the word that was preached to you.​
In verse 23 Peter parallels “word of God” with “imperishable.” The same writer, Peter, in the same writing 1 Peter, in verse 25 writes the word of God “endures eis ton aiona/lit. unto eternity. ” The word of God is not a finite age long but imperishable. Thus by definition “aion” here means “eternity”

[25]1 Peter 5:10
(10) And the God of all grace, who called you to his eternal [aionion] glory in Christ, after you have suffered a little while, [oligon] will himself restore you and make you strong, firm and steadfast.​
In this verse Peter juxtaposed “aionios” with “little while” Jesus does not give His followers a finite period of glory then they eventually die. Thus “aionios” here, by definition, means “eternal.”

OldShepherd said:
Some people claim that “aionios” never means eternity/eternal/everlasting because it sometimes refers to something which is not/cannot be eternal,
Click to expand...

How do you understand the following? Is this particular fire still burning?
Jude 7 (KJV): Even as Sodom and Gomorrha, and the cities about them in like manner, giving themselves over to fornication, and going after strange flesh, are set forth for an example, suffering the vengeance of eternal fire.

How do you understand the following? Is this particular fire still burning?
Jude 7 (KJV): Even as Sodom and Gomorrha, and the cities about them in like manner, giving themselves over to fornication, and going after strange flesh, are set forth for an example, suffering the vengeance of eternal fire.

Do you really think that one verse refutes the 26 vss. I exegeted? Tell you what amigo you reply directly to my post and I will show that your proof text does NOT mean what you think it does. Rethink your post, what is the referent?

EOB Matthew:25:46 When he will answer them, saying: ‘Amen, I tell you: as much as you did not do it to one of the least of these, you did not do it to me.’ 46 These [ones on the left] will go away into eternal [αἰώνιος/aionios] punishment, [κόλασις/kolasis] but the righteous into eternal [αἰώνιος/aionios] life.”​
Greek has been the language of the Eastern Greek Orthodox church since its inception, 2000 years ago +/-. Note, the native Greek speaking Eastern Orthodox Greek scholars, translators of the EOB, translated “aionios,” in Matt 25:46, as “eternal,” NOT “age.” or some other nonsense.
Who better than the team of native Greek speaking scholars, translators of the Eastern Greek Orthodox Bible [EOB], quoted below, know the correct meaning of the Greek words in the N.T.?
Link to EOB online: 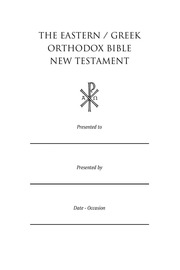 EOB 1 John 4:18 There is no fear in love, but perfect love casts out fear, because fear is connected with punishment.[ κόλασις/kolasis] But the one who fears is not yet perfect in love.​
In the EOB the Greek word “kolasis” is translated “punishment” in both Matt 25:46 and 1 John 4:18. Some misinformed folks claim “kolasis” really means “prune” or “correction.” However, that is an etymological fallacy. According to the EOB Greek scholars it means “punishment.”
Note: in 1 John 4:18 there is no correction, the one with “kolasis” is not made perfect. Thus “kolasis” does not/cannot mean “correction.”
…..It is acknowledged that modern Greek differs from koine Greek but I am confident that the Greek speaking EOB scholars are competent enough to know the correct meanings of old words which may have changed in meaning or are no longer used and translate them correctly. Just as scholars today know the meaning of archaic words which occur in the KJV and translate them correctly.
You must log in or register to reply here.
Share:
Facebook Twitter Reddit Pinterest Tumblr WhatsApp Share Link
Top