Does the LDS church teach that men can evolve into a God?

Theo1689 said:
You know, it's funny... This poster accuses the scribes of intentionally changing Scripture, but here he goes, "It says God justifies the ungodly. I don't believe it, so I'm going to change it to something I believe instead." Just like his pal, Joseph Smith. It seems that it's not so much that the scribes actually changed Scripture, he is simply PROJECTING his own beliefs and actions onto the scribes.

And imagine what it would be like if one could simply reject any Scripture that didn't match what someone subjectively considers "common sense". Men would be free to pick and choose what they wanted to believe, and ignore the rest, and there would be pure chaos. No WONDER there are thousands of Mormon sects in existence!

Yep, we probably believe He does, because GOD SAID SO, right there in Scripture.
As the saying goes, "God said it, we believe it, that settles it."

Rom. 4:5 And to the one who does not work but believes in him who justifies the ungodly, his faith is counted as righteousness,

Of course, Smith didn't like that verse, and so he took it upon himself to CHANGE it to "justifieth NOT the ungodly", but there are ZERO (repeat, ZERO) manuscripts to support his change. EVERY SINGLE manuscript we have of Romans has the reading found in the KJV and all translations.

But it's not just Scripture, it actually IS "common sense", that "God justifies the ungodly". If we were ALREADY "godly", there would be no need to "justify" us, since we would already be "just". We NEED God to justify is, because we cannot justify ourselves. If we were already godly before God justified us, what does God "justifying" us actually accomplish? Does He simply "recognize" or "notarize" or "declare" what we have already done for ourselves?

There was a poster here, years ago, AaronShaf. Between the two of us, we came up with a good analogy of the ridiculousness of Mormon theology. Making ourselves "godly" before we are justified is like cleaning our house from top to bottom, before we hire the maid. The whole point of HAVING a maid is to clean the house for us!

And that's the whole problem with the Mormon view that the Bible has been "corrupted". If it has been corrupted, how do you know that Rom. 4:5 has been corrupted, but Ps. 82 hasn't? That's very conVEEEEEEEEEEEnient and self-serving, wouldn't you say? Last I checked, there hasn't been an official "list" of "corrupted verses in the Bible" put out by the "prophet".

Of course not.
The sins are not justified.
But the sinner can be forgiven.

Rom. 4:7 “Blessed are those whose lawless deeds are forgiven,
and whose sins are covered;
8 blessed is the man against whom the Lord will not count his sin.”

Correct. And God causes them to be PENITENT through regeneration.
That's why He gives us a new heart, that makes us sorrowful for what we've done.

Sorry, that's not Biblical.
That's you making up your own personal theology.
Perhaps you can realize that theology over your own world when you get "promoted" to Godhood.
But for now, we live in God the Father's world.
And we live by HIS reality, not yours.

I love how Mormons think they can play fast and loose with Scripture, and add to it indescriminantly, without ANY basis whatsoever.

Again, it seems that Mormons are projecting their OWN editorial "authority" onto the ancient scribes.


When "works" are mentioned, they are (1) excluded as to being "required" for salvation, and (2) what we will walk in AFTER we are saved:

Eph. 2:8 For by grace you have been saved through faith. And this is not your own doing; it is the gift of God, 9 not a result of works, so that no one may boast. 10 For we are his workmanship, created in Christ Jesus for good works, which God prepared beforehand, that we should walk in them.

2 Tim. 1:9 who saved us and called us to a holy calling, not because of our works but because of his own purpose and grace, which he gave us in Christ Jesus before the ages began,

Tit. 3:5 he saved us, not because of works done by us in righteousness, but according to his own mercy, by the washing of regeneration and renewal of the Holy Spirit,

Rom. 11:5 So too at the present time there is a remnant, chosen by grace. 6 But if it is by grace, it is no longer on the basis of works; otherwise grace would no longer be grace.

Funny how "works" is always NEGATED in these passages...
Click to expand...

Great post, Theo! And good point--IF they believe that Romans 4:5 has been corrupted--then why not Ps. 82? Or Matthew 19? Or James 2:24? HOW do the Mormons know that those verses have not been "corrupted"?

Easy as pie to imagine! The Bible verses those in Mormonism do NOT like, that fully support salvation by grace through faith in Christ Jesus our Lord, have been "corrupted." Even though they have zero evidence to support their assertions, they still make them. The burden of proof is on THEM to prove their assertion, but they never do. They practice this style of biblical hermeneutics: 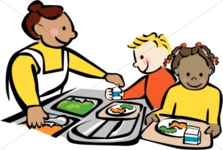 But I too noted that the "godly" do NOT need to be justified, because they are already just in God's sight! It is the UNgodly that need justification--and that means ALL OF US, since ALL have sinned and fallen short of the glory of God.

zerinus said:
The Mormonism forum has become a bit boring to be honest. It is the same old stuff most of the time. If something interesting was said at some point I may deside to respond to it if I see it, which I may not, since I don't hag around this place as much as before.
Click to expand...

Well then why don’t you say something interesting?

Magdalena said:
Well then why don’t you say something interesting?
Click to expand...

The Church is true!

dberrie2020 said:
One could not align that statement, as an open-ended statement--with LDS theology.

Jesus Christ justified all men of life--including the ungodly--as a free gift to all men--when it comes to the Atonement and resurrection of Jesus Christ absolving all men of the condemnation brought upon all men due to the Fall:
Click to expand...

I'm not sure what your point is. Are you saying that the ungodly will be saved in heaven?

dberrie2020 said:
Romans 5:18---King James Version
18 Therefore as by the offence of one judgment came upon all men to condemnation; even so by the righteousness of one the free gift came upon all men unto justification of life.
Click to expand...

I'm not disputing this statement. I don't believe Joseph Smith's adjustment to Rom 4:5 has anything to do with the free gift. I don't believe that practicing ungodly men will ever be justified through the atonement.

Bonnie said:
But I too noted that the "godly" do NOT need to be justified
Click to expand...

The point is rather insignificant since there was only one godly individual who ever lived, according to your theology that is.

The Book of Mormon is the word of God! 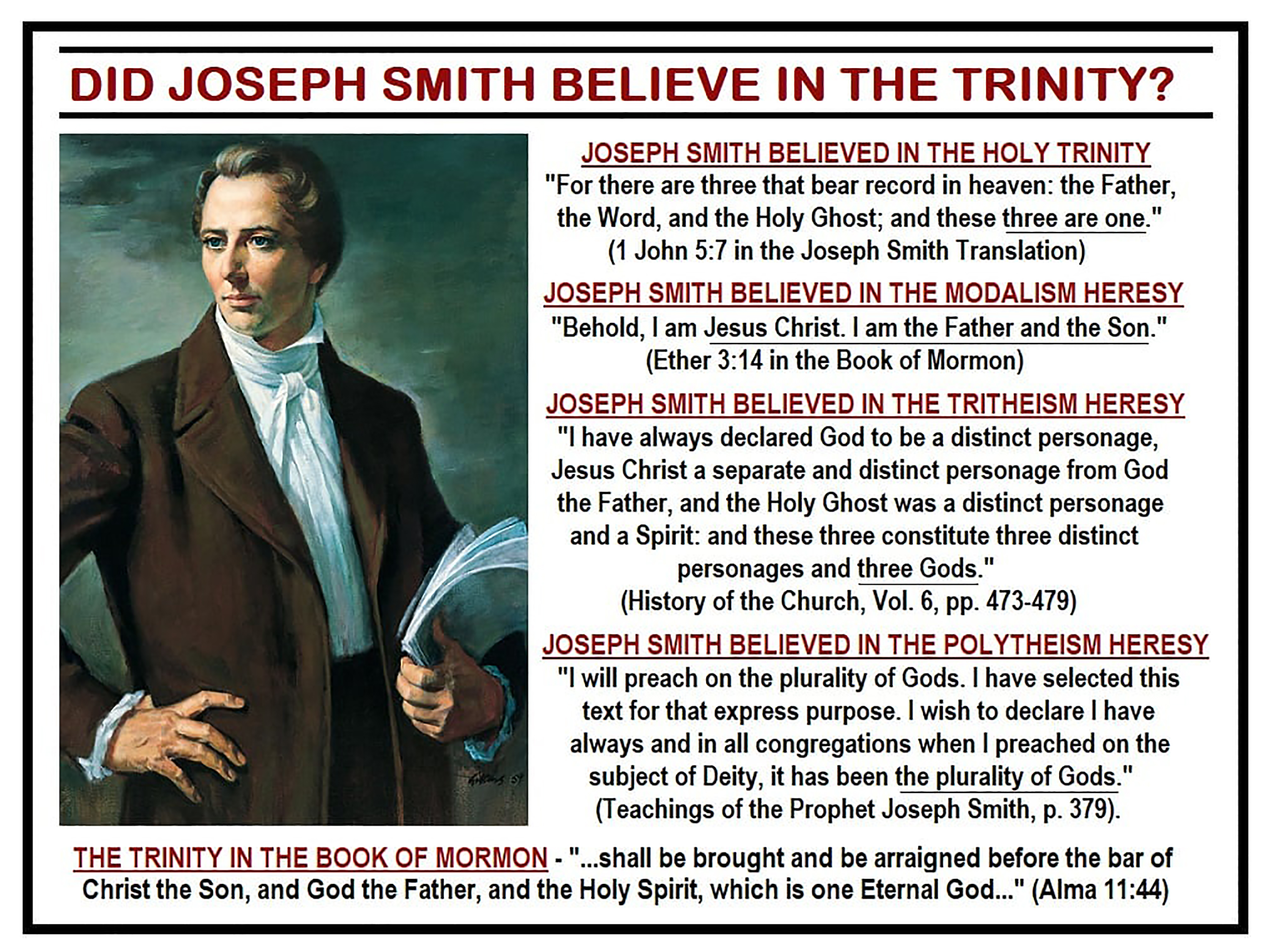 BOOOOORING! Nothing but a repetition of what a Mormon debate tactic--when all else fails, and one cannot defend one's Mormon beliefs or prove them from the Bible, fall back upon one's "testimony." Point no. 6 in my list in my signature.

He says nothing. I have given him some options to which he can reply. He won't.

Bonnie said:
BOOOOORING! Nothing but a repetition of what a Mormon debate tactic--when all else fails, and one cannot defend one's Mormon beliefs or prove them from the Bible, fall back upon one's "testimony." Point no. 6 in my list in my signature.
Click to expand...

You forgot about the Book of Mormon!

zerinus said:
You forgot about the Book of Mormon!
Click to expand...

Smith was all over the place, wasn't he? Plus he lied--he did NOT always declare that Father, Son, and HG are three Gods.

zerinus said:
The Book of Mormon is the word of God!
Click to expand...

More falling back on one's testimony, when all else fails! The BoM is the word of MEN, except for the excerpts from Isaiah.

Something has been brought to the table--

Psalm 82:1---English Standard Version
1 God has taken his place in the divine council;
in the midst of the gods he holds judgment:

Interestingly enough, “evolve” into God supports the unbiblical belief that “God” is a different species.
The question is loaded with a false premise.

Bonnie said:
Smith was all over the place, wasn't he? Plus he lied--he did NOT always declare that Father, Son, and HG are three Gods.
Click to expand...

With the understanding of the Godhead, (not the Trinity) I show consistency in all those statements. What are you looking at?

Aaron32 said:
Interestingly enough, “evolve” into God supports the unbiblical belief that “God” is a different species.
The question is loaded with a false premise.
Click to expand...

Is a butterfly a different “species” than a caterpillar?