Today in the Orthodox Church, the Saturday before Holy Week, we celebrate the miracle of our Lord and Savior Jesus Christ when he raised Lazarus from the dead after he had lain in the grave four days.

By raising Lazarus from the dead before Your Passion, You confirmed the universal resurrection, O Christ God! Like the children with palms of victory, We cry out to You, O Vanquisher of Death; Hosanna in the highest! Blessed is He that comes in the name of the Lord!

Christ - the Joy, the Truth, and the Light of All, the Life of the World and the Resurrection - has appeared in his goodness to those on earth. He has become the Image of our resurrection, granting divine forgiveness to all.

O Christ God, when Thou didst raise Lazarus from the dead, before Thy Passion, thou didst confirm the universal resurrection. Wherefore, we, like babes, carry the insignia of triumph and victory, and cry to Thee, O vanquisher of death, Hosanna in the highest. Blessed is he that cometh in the Name of the Lord.

By Your word, O Word of God, Lazarus now leaps out of death, having returned to this life. Therefore the peoples honor You with their branches, O Mighty One; for You shall destroy Hades utterly by Your own death.

By means of Lazarus has Christ already plundered you, O death. Where is your victory, O Hades? For the lament of Bethany is handed over now to you. Let us all wave against it our branches of victory. 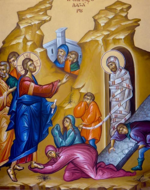