Promotion of transgenderism by the West a "crime against humanity"

Putin slammed the "West" for teaching children that they can change their gender, calling it a crime against humanity. 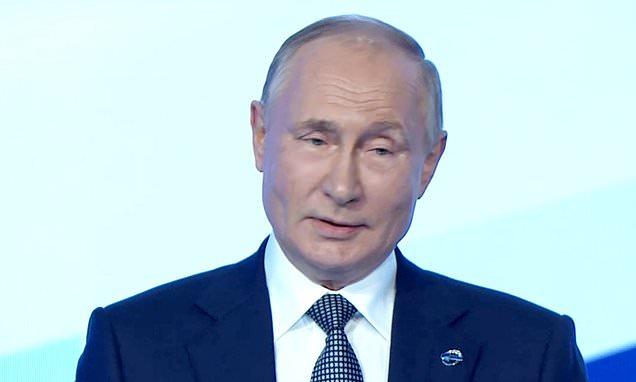 The Russian President, speaking in Sochi, said it is 'close to a crime against humanity' for young boys and girls to learn about becoming transgender.

In effect he is accusing Western leaders of worshipping the devil by fomenting transgenderism and gay rights, which is the bed fellow of transgenderism.

Whatever views one has of Putin, a devious leader given to nepotism and personal enrichment, and where Russia is itself a cesspit of sexual immorality, this charge against the West sticks.

Antinomianism or a rejection of God's law, i.e. moral decadence, is an issue arising not from the principle of democracy, but from universal suffrage and a constitution in which moral norms and values are unprotected, leading to spiritual values based on greed and the lowest common moral denominator amongst the political classes.

Could it just be that witchcraft and dabbling with the devil is really the default religion of the political classes of most western democracies now?
B

Yes I agree it is and so do most people. I know most people in their 20's I have talked to are too scared to object at work.and socially for fear of repercussions. The west is captured by woke and particularly business education and police and media.

In some ways the West is no better than the Russia it criticises.
C

BMS said:
Yes I agree it is and so do most people. I know most people in their 20's I have talked to are too scared to object at work.and socially for fear of repercussions. The west is captured by woke and particularly business education and police and media.

In some ways the West is no better than the Russia it criticises.
Click to expand...

In many way, the West is worse.

20Woe to those who call evil good
and good evil,
who put darkness for light
and light for darkness,
who put bitter for sweet
and sweet for bitter.

22Woe to those who are heroes at drinking wine
and champions at mixing drinks,
23who acquit the guilty for a bribe,
but deny justice to the innocent.
24Therefore, as tongues of fire lick up straw
and as dry grass sinks down in the flames,
so their roots will decay
and their flowers blow away like dust;
for they have rejected the law of the Lord Almighty
and spurned the word of the Holy One of Israel.
25Therefore the Lord’s anger burns against his people;
his hand is raised and he strikes them down.
The mountains shake,
and the dead bodies are like refuse in the streets.
B

Woke is exchaging the truth for a lie, but even in secular scientific terms its exchanging reality for make believe on the basis of feelings.
I think the Isaiah verses describes more about human conditions which are always prevelant, and what we have now with woke is somewhat different and I am still looking for parallels in the Bible.