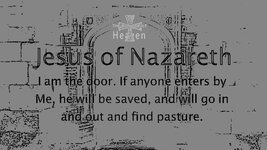 The Necessity of difficult Words!

Why draw into these things in this way? Why not just simply answer a question concerning wickedness and vanity with an affirmation of goodness, of God and Christ? The reason is because of the times in which we live, when all of Satans’ efforts to deceive man as well as to utilise mans discontent with God, will come to a fulfilment. Without men Satan would be incapable of doing anything beyond him self and a number of angels which followed him in rebellion in former times. He is already judged in his body as well as having his ambitions brought to nothing. The Lord overcame him through the cross and his end is certain.

He is called the Prince of the Power of the Air not the Prince of the Air. It is the power of the air and not the air itself. The air belongs to God, but the power over it is given to principalities who themselves must give an account. On the other hand he is also called the god of this world or the ruler of this world. The heavens and the earth belong to God, but the world is Satans dominion. Unless we get this we will have no real understanding to base our warfare on. Neither will we be able to resist contending with men on matters which in truth belong to God. Yet contend some must according to Gods calling, both men and angels because of the rebellion of men not the rebellion of Satan who is already defeated and laid waste by the work of the Cross. When men are drawn away from trusting in God they too look to their own bodies and minds to find the answers to their own condition and discontent. Philosophy by what ever measure will always lead men astray. This is why it is written that God has chosen not the wise of this world but the foolish in order to put those who are wise to foolishness. Yet the gospel of grace has itself been philosophised even by those who are soundly saved. It is the subtly of the wicked one that where he is able he will use this schism of reliance upon the flesh by men, not angels, which all of us can fall into and thereby many do not believe even in the grace of God as a sufficiency for walking. So that on the one hand many saints become individualistic and lawless resulting in Christ Himself being impugned amongst unbelievers.

The need for discernment is never greater pressed upon us than it is today. Unless we learn to deny our selves, a thing which we cannot do easily of ourselves, we will risk being a part of the problem of rebellion against God even though we will be certain because we love God and Christ that we could not be so inclined. Yet the same malady of discontent is evident today amongst those who are called and chosen as it has been in every day when saints do not take up their cross. The cross is not only the place whereon Christ was crucified for sin, but it is insofar as we realise the union, the same place whereon all men, in Christs body were also crucified unto death. Only union in Christs death can lead to walking in His resurrection life. Only the resurrection life in Christ has overcome the world. If we desired to overcome the world as well we would not only have to be in Christ by faith, but we would also have to walk in His strength and life.

If in our minds we do not think as God Himself thinks , being yet untutored we risk becoming apathetic. Yet in a renewed mind we are able to prove that acceptable and perfect will of God. If we do not have this mind to overcome sin, the flesh and the devil, we will follow the heart which having once again come under the dominion of the body will be led astray. Yet this is what is before us in Christ, not only a new heart but a renewed mind also. To have your mind renewed so as to be able to think as God thinks is truly astonishing. It is written that when we speak, we should speak as though we speak the Word of God. If this were not possible God could not have asked us to have such a mind. Yet God both asks and provides the Way to such a mind. It is the mind of Christ in the spirit which we already posses but it must also be the natural mind having been brought into subjection through obedience to the calling of God, which is taught by God Himself. Therein lays the substance of faith, that having been saved, we would make certain our salvation through this obedience.