Magdalena said:
You’re the Mormon. You explain it.
Click to expand...

You're a critic. You explain it. I believe Joseph Smith explained it pretty well. He received it by the power of God. Now it's your turn (as it's always been).

Magdalena said:
Why isn’t the Mormon church claiming all this “evidence?”
Click to expand...

RiJoRi said:
(Of course, dueling is illegal in the USA!)
Click to expand...

You'd lose in the end anyway.

You know, The entire civilized world, as we know it, used to teach that the world was flat and that the earth was the center of the universe.

Please show me where any of them said, "Thus saith the Lord God, native Americans are lamanites". Did they ever say God said it? Nope.
Click to expand... 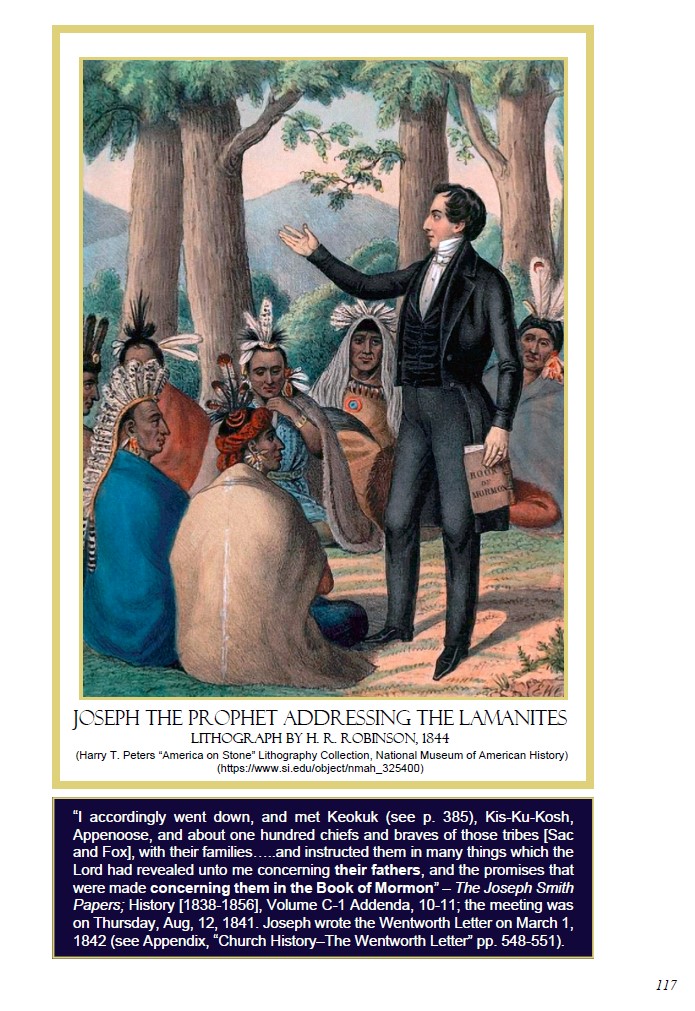 Natives Americans are Lamanites- We Know It-

“Wherefore, the remnant of the house of Joseph shall be built upon this land; and it shall be a land of their inheritance; and they shall build up a holy city unto the Lord, like unto the Jerusalem…

There are several other quotes on this same link.

During the years 1968-71, [John A. Tvedtnes] taught Hebrew at the University of Utah. My practice was to ask new students to respond to a questionnaire,giving some idea of their interests and linguistic background. One student wrote that she wanted to study Hebrew in order to prove the Book of Mormon was a fraud. She approached me after class to explain.

When I inquired why she felt the Book of Mormon was fraudulent, she stated that it was full of errors. I asked for an example. She drew my attention to Alma 46:19,where we read,"When Moroni had said these words,he went forth among the people,waving the rent part of his garment in the air." She noted that in the 1830 edition,this read simply "waving the rent of his garment." In English,the rent is the hole in the garment,not the piece torn out of the garment. Therefore,Moroni could not have waved it. This was an error,she contended and adding the "part" later was mere deception.

This was my first introduction to variations in different editions of the Book of Mormon. Without a Hebrew background,I might have been bothered by it. But the explanation was clear when I considered how Mormon would have written that sentence. Hebrew does not have to add the word part to a verbal substantive like rent as English requires. Thus,broken in Hebrew can refer to a broken thing or a broken part,while new can refer to a new thing. In the verse the student cited,rent would mean rent thing or rent part. Thus, the "error" she saw as evidence of fraud was really a Hebraism that was evidence for the authenticity of the Book of Mormon.

Significantly,the first (1830) edition of the Book of Mormon contains many more Hebraisms than later editions. Later editions, especially in 1837,1840, and 1876,were edited to improve the English in areas where the text appeared to be awkward. Unfortunately,this destroyed some of the evidence for a Hebrew original
Click to expand...

Excellent explanation for those who don't know the difference between a verb and a noun and its usage in the Hebrew language, not that it makes any difference to our critics.

I wonder if it made any differenc to the female student. Probably not. Critics tend to see only what they want while ignoring everything else.

Thank you. That will be all.

Magdalena said:
Can you actually discuss the subject yourself without just posting quotes and copied material?
Click to expand...

Ask a question about the "evidence". I'm sure we'll be glad to discuss it.

The Cracked Planet of Jeff Lindsay​

Mesoamerican Fortifications and the Book of Mormon

In 1970, researchers from Tulane University discovered a huge defensive fortification at Becan in the Yucatan Peninsula. The center of the site is surrounded by a fortification - a ditch - that is nearly 2 kilometers long and roughly 16 meters wide.

Dirt had been piled to make a ridge on the inner side of the ditch. This fortification dates to 150 AD to 450 AD,which fits into Book of Mormon times. David Webster of Tulane describes how he thinks the fortification worked:"To throw 'uphill' from the outside is almost impossible. Defenders, possibly screened by a palisade,could have rained long-distance missiles on approaching enemies using spearthrowers and slings." (David L. Webster, Defensive Earthworks at Becan, Campeche, Mexico: Implications for Mayan Warfare ,Tulane University, Middle American Research Institute,Publication 41,1976, p. 108, as cited by John L. Sorensen, Ensign,Sept. 1984,p. 33.)

18 Now behold, the Lamanites could not get into their forts of security by any other way save by the entrance,because of the highness of the bank which had been thrown up,and the depth of the ditch which had been dug round about,save it were by the entrance.
19 And thus were the Nephites prepared to destroy all such as should attempt to climb up to enter the fort by any other way,by casting over stones and arrows at them.
20 Thus they were prepared,yea, a body of their strongest men,with their swords and their slings,to smite down all who should attempt to come into their place of security by the place of entrance;and thus were they prepared to defend themselves against the Lamanites.
Click to expand...

Bonnie said:
You think this is proof??? Laughable!
Click to expand...

Yea. But it's not as funny as "evidence is proof"
It might not be proof (we never said it was - you guys did), but it is evidence.

Bonnie said:
In English, we could also say that someone waved the "rent" in a piece of cloth, meaning the tear or hole. I could take a shirt with a big hole in it, and wave the hole at my husband, to show that the shirt needed to be discarded.
Click to expand...

You'd be waving the shirt. You can't wave a hole.

2. An Arabian altar at a crossroad called Nahom​

Okay, we admit, this item is on most lists of Book of Mormon evidences—undoubtedly because it’s so spot-on. Not one, but three ancient altars inscribed with the same three Semitic consonants of the place-name, Nahom, as mentioned in 1 Nephi 16:34. Never mind the lack of vowels in the Hebrew alphabet that might alter the pronunciation: “Ni-ham,” “Nu-heem,” “Nehum”. The coincidence remains staggering. Not only are these altars found in the right place, they date to the right time. If that’s not enough, Nahom itself appears associated with the Hebrew word for “mourning”, which is precisely why the Lehites were there. Nahom was one of the largest burial areas in ancient Southwestern Arabia,6 and the travelers were there to mourn the death of their beloved friend, Ishmael.

Joseph Smith simply could not have known this in 1830. Some of the theories proposed to explain away this coincidence have lower odds than Joseph just making a wild and lucky guess.
Click to expand...

LOTS of people probably left Jerusalem in the 6th century BC. So, this proves nothing. Except that Smith took the Biblical name Nahum and changed it to Nahom.

Bonnie said:
The idea that this change in later editions destroyed the "evidence for a Hebrew original" is silly!
Click to expand...

Again with the opinions.

It doesn't matter whether you think it's silly or not. The evidence is that the 1830 edition was correct word structure in Hebrew.

brotherofJared said:
Yea. But it's not as funny as "evidence is proof"
It might not be proof (we never said it was - you guys did), but it is evidence.
Click to expand...

Oh, so you agree that it IS funny! Now we are making headway!

LOTS of irrefutable evidence might be proof...but what has been put down on here so far is mostly speculation and not proof of any kind, or real evidence, or irrefutable. I have shown how some of this "evidence" came about, like names and spellings and such. Joseph Smith was a great reader and had a vivid imagination, as his own mother attested to.
Last edited: Apr 24, 2021

Bonnie said:
Central American Indians were known to make war against each other a lot, before the Europeans came.
Click to expand...

Again, you missed the point. It wasn't about war. It was about the preparations for war ... exactly as the Book of Mormon describes it. This kind of preparation was not known to Americans in 1800. This information didn't come out until... well, read the article again. It has the date.

A prime example of a topic on which expert views have changed dramatically to be more in agreement with the Book of Mormon is armed conflict. Until recently,the prevailing picture of Mesoamerica was that only peaceful societies existed in the climactic Classic era,exemplified by the spectacular Maya and Teotihuacan ruins dating from about A.D. 300 to 800.
Click to expand...

Well, if this isn't excellent "evidence" of hoof-in-mouth disease which appears to be a pandemic amongst our critics, I don't know what is. Some might even say it's "proof".

But I'm sure that's the reason you posted the "evidence".

Bonnie said:
People all over the world have waged wars on each other since antiquity and it is still going on. So the Mesoamerican natives waging war against each other is nothing new
Click to expand...

You still don't get it. Up until 1970, the idea that "Mesoamerican natives waging war against each other" was new. But this kind of denial is what I'd expect from our critics.

Bonnie said:
But Smith claimed to get the BoM from God and to write it down exactly as God directed him to,
Click to expand...

No such claim as EVER been made, except by our critics who like to pretend such claims were made.

Bonnie said:
So? American Indians on their own could not have thought up body armor?
Click to expand...

LOL. They must have forgot about it.

No kidding. The word "God" isn't Hebrew either.
It's English

brotherofJared said:
You still don't get it. Up until 1970, the idea that "Mesoamerican natives waging war against each other" was new. But this kind of denial is what I'd expect from our critics.
Click to expand...