Watch how you use their words

Yakuda said:
That IS the bible. Thank you catholic church
Click to expand...

Are you catholic?
Y

e v e said:
Are you catholic?
Click to expand...

There is nothing else to be.

Yakuda said:
There is nothing else to be.
Click to expand...

What do you mean there is nothing else?

Yakuda said:
There is nothing else to be.
Click to expand...

This is what the pope represents. Why align with Dagon religion? 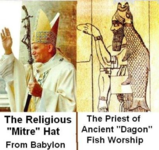 e v e said:
This is what the pope represents. Why align with Dagon religion?
View attachment 176
Click to expand...

Again there is nothing else to be. What you believe is heresy. I definitely wont go there. You will either engage in a discussion or if you insist on more foolishness like abo r I won't bother responding to you any longer. Your choice.

John t said:
I recall that c.220 canon was fully codified, but I cannot recall the source. The fact that the heretic Marcion created his false canon c. 140 indicates that the process was on going well before Nicaea in 325.

That fact destroys the myth that the "Church created canon".
Click to expand...

I was with you until the last sentence. The Church and its leaders already existed in 140 AD. Pope Clement for instance was the bishop of Rome in the late 1st Century.
J

rakovsky said:
I was with you until the last sentence. The Church and its leaders already existed in 140 AD. Pope Clement for instance was the bishop of Rome in the late 1st Century.
Click to expand...

There are some of the RCC persuasion who look to the church as an intercessor between man and God because through the Mass, and in particular through the Eucharist, the RCC gives salvation to its adherents One part of that false paradigm is the concept that "the RC Church gave us canon" (I am not a RCC, but I am stating what they believe)

To emphasize that fact, I used the heretic Marcion as an example of people who attempted to define the canon of the New Testament.

FYI there are posters who deny who deny both the Hypostatic Union and the Trinity. The user name of one of them is a dead give away as to his theology. Therefore, in this part of CARM, one has to be very careful with regard to how those sorts of cultists post and spread their heresies.
You must log in or register to reply here.
Share:
Facebook Twitter Reddit Pinterest Tumblr WhatsApp Email Share Link
Top